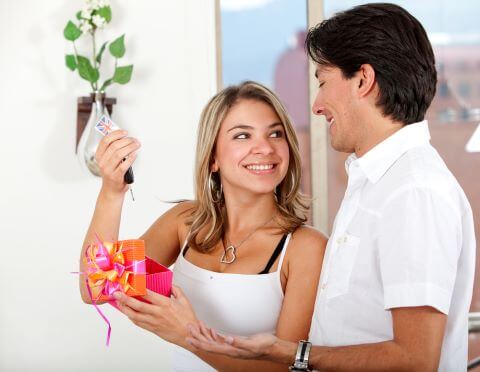 In an Arizona divorce, sometimes a gift is no longer a gift. According to the Arizona Court of Appeals decisions in Cameron v Cameron and Hrudka v Hrudka, a gift to your spouse, isn’t always a gift. Community Property, Sole and Separate Property, and Property division in divorce can be complicated.

In the case of Cameron v. Cameron, 148 Ariz. 558 (App. 1985), the Husband gifted his Wife a car for her birthday. At the time of divorce, she argued because he gave the car to her, it should be hers in the divorce.

The fact that the car was given as a birthday gift does not, by itself, qualify as a clear showing husband intended to give up his ownership interest in the vehicle. Additionally, the fact he intended wife to drive the car did not mean he gave up his interest in the vehicle.  “Such ‘gifts’ between spouses of assets intended for community use are no more than a designation of whom the primary user will be and not a deliberate attempt to convert community property into separate property.” Id.

Apparently, from the perspective of the Court of Appeals, when one spouse gives another spouse a car, the “gift” they’re giving is the right to be the spouse designated to drive that car—the car is not the gift.

A similar result was reached in a divorce involving a million dollars’ worth of jewelry. In Hrudka v. Hrudka, 186 Ariz. 84, 92 (App. 1995). Wife had 45 pieces of jewelry; Husband acknowledged giving her many of the items, but he argued the jewelry was purchased as an investment. Wife argued they were gifts, and she wore them; therefore, they belonged to her as her sole and separate property.

The trial court awarded 20 pieces of jewelry to Wife, nine to Husband, and determined the remaining pieces were community property. Wife appealed, but the Court of Appeals affirmed the trial court’s ruling.

The Court of Appeals wrote, “Wife bases her claim of gift upon an assertion of possession, i.e., that, at some point, Husband physically handed over items of jewelry to her and she wore them. However, this testimony alone does not establish a gift. Rather, Wife must demonstrate (1) donative intent, (2) delivery and (3) a vesting of irrevocable title on delivery.” Id. at 93.

Furthermore, the Court said, the fact Wife wore the jewelry does establish whether that jewelry is a gift or an investment. Id.

The jewelry wasn’t the only gift Wife was claiming should be her sole and separate property. For Valentine’s Day 1987, Husband presented her with a Rolls Royce with a red bow on it. In the divorce proceedings, he claimed that the Rolls Royce also was an investment. Further, the car salesman testified that it was his decision, not Husband’s, to put the red bow on it. Husband also produced testimony that the parties rarely drove the car to preserve its value. Id. The trial court determined that the vehicle was community property, and the Court of Appeals affirmed that ruling. Id.

Determining What is a Gift Comes Down to Intent